Holding Me Together, featuring Reactions to Homophobia 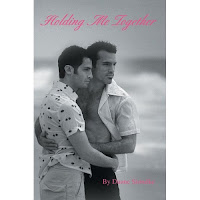 SWS Pride in the Arts For The Record Award! Reactions to Homophobia counters anti-gay comments (“Adam and Steve," “Sodom and Gomorrah,” “special rights,” “cures,” etc.). The revised, second edition of Holding Me Together begins with an updated version of Reactions to Homophobia, followed by poems and short essays on a variety of topics, such as writing, AIDS, religion, racism, violence, friendship, family, and gay relationships. It also includes many new or newly revised essays and poems. Table of Contents

Part One: Reactions to Homophobia, An Essay

Reactions to Homophobia: Introduction. “Unlike gay people, I don't tell people what my wife and I do in bed.” “They can be gay, as long as they hide it.” “If a normal guy or a white guy gets beat up, hate crimes laws can't help him. That isn't fair.” “I’m not queer, so why I should care about those people?” “We shouldn't have to see gays when we watch TV or movies.” “I would accept gays, but I believe in family values.” “Family members spending time with their gay relatives would suggest that they endorse that lifestyle.” “They live that gay lifestyle.” “It's an insult to African Americans to compare being gay to being black.” “The parts don't fit.” “If we weren't so tolerant of gays, there wouldn't be any.” “I wouldn't mind gays if it weren't for them checking me out.” “Having gay parents makes children gay.” “Gay people should try to be cured.” “Homosexuality is a mental illness.” “If everyone were gay, we'd stop having children, and die out.” “You deserve what happens to you, because you choose to be gay.” “Accepting homosexuality destroyed empires like Greece and Rome, and even led to the Holocaust.” “They recruit.” “They just haven't met the right person of the opposite sex yet.” “Gays can't adopt, because their children will get teased, and that isn't fair.” “God sent AIDS to the homosexuals because He loves His children and wants to turn them back to Him.” “God didn't create Adam and Steve.” “The Bible says it's wrong.” “The Bible says God destroyed Sodom and Gomorrah because of gays.” “I love the sinner, hate the sin.” “Anyone who condones homosexuality can’t be religious or moral.” “We can't allow gay marriages, because tradition protected heterosexual marriage and reproduction for thousands of years.” “Public schools need to quit hiring gays and quit promoting homosexuality.” “Gays can't serve in the military, because that would disrupt efficiency.” “Surveys prove gays are a much smaller number than they claim, that their average lifespan is 44 years, and that they have 5000-15,000 partners per year.” “Homosexuals are just a bunch of men dressing up like women.” Reactions to Homophobia: Conclusion. Resources for Reactions to Homophobia.

More About the Author and His Works.

Dann Hazel used Reactions to Homophobia as one of the resources for his book Witness: Gay and Lesbian Clergy Report from the Front. Kris Coonan, UQ Union, University of Queensland, used it as a resource for his article Sexual Prejudice: Understanding Homophobia and Heterosexism, Biphobia and Transphobia. The Queensland Government's Community Benefit Fund and PFLAG Brisbane used it as a resource for the PDF booklet Assisting Those Who Come Into Regular Contact with Lesbian and Gay Youth. “By killing yourself, intentionally or through unsafe sex, you call yourself worthless and expendable. How can you think of a human being that way? Quit punishing yourself for the bigotry in society. Refuse to help the cause of homophobia. Take care of yourself. Learn to love yourself and protect yourself. See yourself and your partner as worth protecting. Treat safer sex as an act of defiance and gay pride, a statement about your love for yourself, a statement about the value of your life. Treat living each day as a tear in the fabric of bigotry.”

From Not Worth Dying Over, an essay in Holding Me Together. Copyright 1999/2005 Duane Simolke. Paul Harris quotes that passage in the book From Our Own Lips: The Book of GLBT Quotations. Minnie Van PileUp (the pseudonym of a writer who lives in Boston) quotes the same passage in The Quotable Queer: Fabulous Wit and Wisdom from the Gays, the Straight, and Everybody In-Between.

Mountman, a reviewer for StoneWall Society, has created animated versions of two poems from Holding. Visit MS Agent Pages for the software and links. (Note: the poems are earlier versions, and slightly different from how they appear in Holding’s 2nd Edition.)

Rainbowslash created the video He Holds Me Together for Home, one of the poems from Holding Me Together.

StoneWall Society used my books The Acorn Stories and Holding Me Together for spoken word readings during its Pride in the Arts Festival (Virginia, 2006).

“If I had a magic wand, I would put this book in the hands of all our gay or questioning youth.” –author, painter, dancer Copernicus again

“In the long essay, ‘Reactions to Homophobia,’ readers will meet an intelligent and patient narrator who takes virtually every ignorant question and misstatement seemingly ever made about gays and lesbians and, as though speaking to those who ask such questions or make disparaging remarks about homosexuals, refutes the ignorance.” –author Ronald L. Donaghe

(Referring to the poems…) “My personal favorite is the aptly titled ‘Home’, which also provides the book's title. ‘Home’ describes the presence and the touch of a lover as ‘holding me together’. ” –James Whitney

In a review that previously appeared at QMediaReviews.com, critic Shawn Revelle called the revised, second edition of my book Holding Me Together “an inspiring and timely collection of works.” Revelle went on to share details about the book, which he also called “a worthwhile and life-affirming read.”

If you like my writing, please support it by ordering one of my books for yourself or someone else.

Also available, the short eBook Selected Poems includes the gay love poem “Home,” the strange story of “The Gardener,” and the comical “Angels and Razors,” as well as thirty other poems from Holding Me Together.

Holding Me Together reflects my journey from internalized homophobia to embracing diversity. I wrote honestly about feelings and observations. Creativity led to positivity.

“Hateful knee-jerk phrases can stick in your mind, like a worn-out song you never liked in the first place, but you should learn to see yourself as beautiful and wonderful.” 🏳️‍🌈 Video.

“Treat other people’s insecurities as their weakness, not as a reason to hate yourself or remain silent.” 🏳️‍🌈 Video.

“Try to inform others and get along with others, but never base self-acceptance on whether others accept you.” 🏳️‍🌈 Video.

Please support my work by ordering one of my books for yourself or someone else.