Here’s something new for my readers in the Great White North: SciFi/Fantasy for Canadian Readers!
Posted by Duane at 1:11 PM Links to this post


Short film collections often deliver a mixed bag of good and forgettable movies, along with a few initially enjoyable shorts that end way too abruptly. However, this collection satisfies throughout. All seven features involve gay men and display a unique sense of humor.

Available Men, directed by David Dean Bottrell (15 minutes). Richard Ruccolo (from the adorable romantic comedy All Over the Guy) is one of four men who pair off in the wrong way. Two of them are gay men looking for their blind date, while Ruccolo is an agent who thinks he’s meeting a screenwriter but instead sits down with one of the gay men. The results are hilarious and would be fun as a one-act play. Jack Plotnick, always great in his roles as witty gay men, gives another funny performance while listening to the screenwriter talk about expectations. This short’s director, David Dean Bottrell, recently appeared in several episodes of Boston Legal as an uptight, murderous peeping tom.

Straight Boys, directed by Dave O’Brien (15 minutes). I love the drama The Conrad Boys; Nick Bartzen, one of that movie’s stars, appears here as a college student with a jealous girlfriend and a doting gay roommate. Despite some mild violence and conflicted emotions, Straight Boys delivers an enjoyable slice of light-hearted comedy.

Hello, Thanks, directed by Andrew Blubaugh (8 minutes). Using classified ads and voiceovers, Blubaugh gives a funny look at gay dating. His character’s struggle to define himself propels the fast-paced humor. It gets a little too fast, though, and most viewers probably won’t be able to read all of the ads without hitting the pause button a few times.

Tumbleweed Town, directed by Samara Halperin (8 minutes). I usually dislike animated films. However, this odd feature from 1999 keeps my interest—except during the slow dance, which seems to last longer than the film’s eight minutes by itself. Halperin animates action figures and other toys, subverting icons of heterosexual masculinity: trucks, truckers, cowboys, country music, etc. Halperin’s hyper-masculine action figures kiss, snuggle, and have sex with each other. It’s so goofy and irreverent that it works.

The Underminer, directed by Todd Downing (6 minutes). In an unusual approach to adaptation, author and performance artist Mike Albo portrays two different lead roles, in a film based on his book of the same title. Albo is loveable in one role, but both hilarious and annoying in the other…that of the title character. The “underminer” throws out back-handed compliments, spiteful judgments, or passive aggressive whining, every time he opens his mouth. The results are hilarious and should lead to a feature-length adaptation of the book.

Irene Williams: Queen Of Lincoln Road, directed by Eric Smith (23 minutes). The only documentary in the collection, this film initially seems misplaced. It focuses on an elderly woman who loves to design her own brightly colored clothes. Eric Smith immediately becomes enamored with her, and follows her around with his camera for ten years. Despite the focus on Irene’s flamboyant personality, Smith always shows her in a positive light, while also giving an unusual look at friendship between a gay man and a heterosexual woman. Not surprisingly, this short received ten film festival awards, as well as the PlanetOut Short Movie Award for Best Documentary.

--Duane Simolke, author of The Acorn Stories and Degranon: A Science Fiction Adventure.
Posted by Duane at 9:12 AM Links to this post 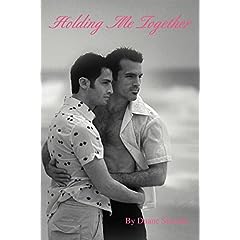 Holding Me Together
Posted by Duane at 2:43 PM Links to this post

As someone who reads every book the prolific and talented Ronald L. Donaghe writes, I waited quite a long time for this particular novel. The series Common Threads in the Life began with Common Sons, a gay classic that went out of print for a while then eventually came back as a print-on-demand book. And the demand definitely existed!

Donaghe then continued his series with The Salvation Mongers, a searing look at the ex-gay movement. That second book used some of the same settings and characters. The couple from the first novel again took center stage in The Blind Season, which introduced readers to a much larger extended family.

Donaghe kept saying he was writing a book called The Gathering, which would bring together the Common Threads characters. Fortunately, he changed his mind about The Gathering concluding the series. At least one more novel remains. Of course, he writes other series as well, but this review strictly focuses on Common Threads.

Tom and Joel, the two young men who come out and fall in love as the title characters of Common Sons, are now in their fifties. The daughter they fathered during The Blind Season is now a grown, fascinating woman, and the mother of that daughter has also forged her own identity as an independent woman who has overcome a troubled past. In The Salvation Mongers, Kelly works to expose the ex-gay group that had caused suffering in his life. In The Gathering, he falls back into Tom and Joel’s life, along with an old enemy.

I would call The Blind Season the darkest part of the series, and this novel shares some of that book’s gritty tragedy. However, the spotlight soon returns to the relationships of The Gathering’s large—and mostly lovable—cast. The characters spring as naturally from the New Mexico landscape as the agrarian life they enjoy. Instead of catty, stereotypical queens in a New York City coffee shop, Donaghe gives us three-dimensional people that represent the lives of countless gays across countless small towns. He also gives us heterosexual characters who often surprise us in their ability or inability to overcome prejudice.

As other reviewers often note, Donaghe also gives us gay couples who work hard to create lasting relationships—with or without gay role models. Tom and Joel’s hard work on their farm constantly mirrors their hard work at making a better life for themselves and other gays. Donaghe not only imagines that possibility, but presents it in an appealing, memorable novel.
Posted by Duane at 3:03 PM Links to this post

The Return of Innocence: A Fantasy Adventure received a 2007 Allbooks Reviewer’s Choice Award!

Watch for a direct-to-DVD release of Babylon 5: The Lost Tales. B5 was one of my all-time favorite TV shows, so I’m glad to see the saga continuing.
Posted by Duane at 3:59 PM Links to this post