Blog Tour: A CURE FOR HUMANITY

My first time hosting a blog tour is for a book that comes out today, A CURE FOR HUMANITY, by A.L. Haringrey. 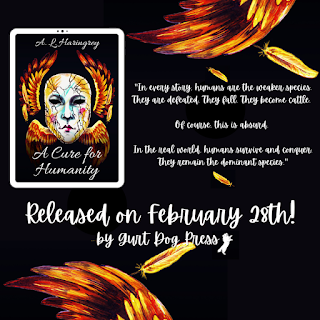 In every story, humans are the weaker species. They are defeated. They fall. They become cattle.

Of course, this is absurd.

In the real world, humans survive and conquer. They remain the dominant species.

For Gyldan Crawford, this is a blessing and a curse. Working for a man who sells tools to regulate vampires and werewolves means Gyldan can provide for his household. But, as the only human living in the house, his choice of profession has always been a sore point... until his friends decide to make use of his position to fight back.

Gyldan is forced to keep several plates spinning—one that makes him the perfect personal assistant to his boss, Albion Saint-Richter; one that supports his friends in taking down his employer; and one that keeps his intimate relationship with Albion a secret. He really doesn't have time for another plate to be added to his frantic performance. But when an unknown entity starts killing off Albion's competitors, the rumour mill starts churning: is the murderer a vampire, a werewolf, or a human?

An excerpt from the book:

Gyldan walked along the length of the display, his stomach churning as he beheld the collage of fear that papered the room. This was a war declaration against the majority, written with the bloodshed caused by a minority. A masterpiece of terror painted with a limited palette. Anyone who looked at this would assume the fourteen years of relative freedom for non-humans had been a bloodbath against humans. But Gyldan knew this was selective history at its finest, fuelled by human panic. There wasn’t a single mention of the blood spilt by humans against non-humans, of course. By this false account, humans had never lifted a violent hand against non-humans.

This blog tour continues at The Library of Mirkwood. Watch here for information about my books, the arts, LGBTQ, and more. Thanks for stopping by, and please also visit A. L. Haringrey on Twitter.

The Acorn Stories and More Reviewed at TMDG Reviews

Thanks TMDGReviews for this #BookReview of The Acorn Stories. #SmallTown #Texas #BookBlog Visit the site for details about how to suggest other books for a review. 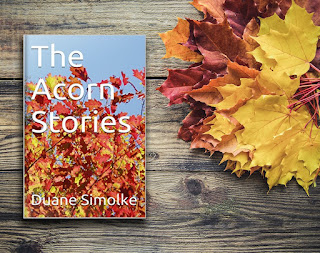 Book Review: Eye of a Needle: And other stories

Book review: Cornelia Fick's Eye of a Needle: And other stories.

Discuss this book at The Traveling Book Review Project.

Sons of Taldra Reviewed at Doctor Who Online

“Refreshingly different, and at its beating heart is some much needed diversity that slots in effortlessly and with purpose.” –Sebastian J. Brook. Read the review at Doctor Who Online. 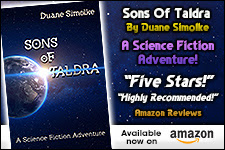