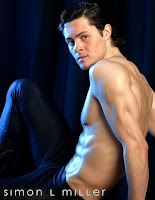 Visit ThisWeekInTexas to read my review of Between Love & Goodbye, a new gay drama that stars Simon L. Miller and Rob Harmon. Tensions from a Visa marriage and a manipulative sibling strain the passionate romance of a gay man and his immigrant lover.
Posted by Duane at 12:29 PM

Elephant On An Opera Stage
By Duane Simolke


You read your program schedule
and ask me to leave.

The thunder of my footsteps
echoes too loudly
for your establishment.

You call me a stupid beast.

Even with my size,
I manage to retreat
back into the shadows.


(From my book Holding Me Together: Essays and Poems).
Posted by Duane at 2:24 PM

Degranon: A Science Fiction Adventure and other gay and lesbian books are now listed again among the sales rankings at Amazon.com, Amazon.Ca, Amazon.Co.UK, etc. The online retailer apparently fixed the reported glitch that removed gay-themed books from its rankings.

Lorfeltez suddenly realized that she had stopped speaking and that everyone had stopped listening, or even jeering. The Maintainers had arrived. They filed through the crowd like a swarm of insects, freely pushing and shoving with all the authority that their office granted them, elbowing several people, and pushing a few out the doorways.

Part of the crowd began disappearing, as if the weight of the entering officers forced them outside. However, many of them failed to move away in time, and the Maintainers freely grabbed at their collars or even punched at them, before finding the sources of the disruption.

A female Maintainer yanked the holo-projectors away, knocking them to the floor, then used the handle of her rifle to destroy them, sending hot metal parts and wires everywhere. One of the wires gashed a woman’s arm, sending out a small spurt of blood. Before even noticing her, the Maintainers quickly managed to handcuff all five men, even while the crowd continued to shift madly about, trying to escape. But then one of the Maintainers assisted the injured woman, holding his hand over the cut on her arm while obviously calling a healer with the transmitter in his ear.

Dr. Lorfeltez saw an elderly red woman in the audience, frail to the point that she had obviously lived beyond the virus’s benefits. One of the Maintainers waved his laser rifle around to scare away the remnants of the controversial gathering; he held the rifle at the center, his hand near the button.

It frightened Lorfeltez to see the Maintainer’s barrel sometimes pointing directly at the old woman. At least the other citizens could move quickly from his senseless demonstration of power, even if some of them ran in too many different directions for everyone to escape. As he swung it around again, the handle struck the old woman on the forehead, knocking her to the floor.

Surely that Maintainer sees what he’s doing, Lorfeltez thought. Just as some members of the crowd almost trampled the old woman, the handsome stranger pulled her up and helped her escape.

Lorfeltez had wanted to intervene as well, but another Maintainer stood beside her, aiming a laser pistol at her. The Maintainer was an extremely tall black woman, but barely more than a teenager, with hair shooting out from her headband, reminding Lorfeltez of a docle flower, one of the few remaining flowers on Valchondria’s overly industrialized landscape. The absence of stripes on her uniform revealed her as a trainee, but she carried herself like a Top Maintainer.

“Dr. Lorfeltez,” she said, her voice brimming with Maintainer superiority, and her unusual height adding to that superiority. Lorfeltez had always hated being short, especially at times like this. The Maintainer continued: “I find you in conflict with the glory of Valchondria. To protect our children and our society, I hereby refrain you from public mobility. Any verbalization on your part will be considered heavy hazard. Do you recognize my guidance?”

Her dark brown eyes studied Lorfeltez. The self-confidence was real, but Lorfeltez could see that this Maintainer didn’t actually want to arrest her or stop her from voicing her concerns. Something existed between them: a sort of sisterhood, if such a thing could exist for two young women in a world with no siblings below the age of forty.

But it was her job, her genetic destiny as someone with a Maintainer-quality genetic structure. That genetic structure reasserted itself. “I ask again, Dr. Lorfeltez: do you recognize my guidance?”

“I recognize it.” Lorfeltez clasped her hands together behind her back, her slender fingers grasping each other. It was the proper motion of surrender, and she imagined one of her own hands as that of her mother or her father, reaching out to comfort her in this moment of crisis.

But they wouldn’t be holding her hand anymore. They had warned her to avoid the rally. “Think of your career,” her mother had said. Her father had said much worse: “Stay away from disruptive elements. If you don’t distance yourself from them, we’ll have no choice but to distance ourselves from you. Be maintained, if you want to be a part of this family.”
Posted by Duane at 6:37 PM 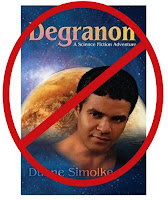 Writer/director Jeff London is currently casting his next movie, The Wind Was Warm. London will begin filming in July, with settings in Arizona and California. Watch the Guardian Pictures website for more details. London’s previous films include Arizona Sky and Regarding Billy.
Posted by Duane at 4:55 PM

Email ThisBlogThis!Share to TwitterShare to FacebookShare to Pinterest
Labels: Gay

The following excerpt is from “Flip, Turn,” a story in my book The Acorn Stories, copyright 1998, 2003. Read reviews of the book at Kirkus, Amazon.Com, bn.com (2nd edition reviews), bn.com (1st edition), and Authonomy.


I pulled myself up enough to see the alarm clock just across my room. 10:15! It had happened again: after dreaming during the night that my alarm clock was buzzing, I had gotten up and turned it off, realized I was dreaming, stayed in bed wondering whether I had also dreamed turning it off, then fallen asleep without turning it back on.

“Swimming,” I mumbled into my pillow. I was supposed to have met Jimmy Jacobs at Acorn College’s indoor pool around ten. Since I hadn’t gone swimming in weeks, I had no idea where my alumni I.D. was. I searched my disintegrating wallet, pulling out shreds of napkins, envelopes, and newspaper with scribbled numbers. Some of the numbers looked like combinations for P.O. boxes or lockers, while others looked like phone numbers, but none of them had words on them. My wallet housed numbers detached from their purpose. I thought I should keep them in case I needed them one day. But how would I know if I needed them, or which ones to use? Then I found a phone number with a familiar handwriting.

I could have called all the phone numbers to see if I recognized the voices of the people who answered. Then I could just hang up. Maybe that’s what people are doing—the people who call me then hang up. Maybe they sorted through old wallets and purses, found my number on a scrap of paper. After finding my I.D. in the dark recesses of my wallet, I stuffed all the numbers back in to recreate whatever equation they had formed, knowing I would probably not see them again until my wallet fell apart.

After pulling on swim trunks, T-shirt, and tennis shoes, I walked outside into Mom and Dad’s yard sale and suddenly remembered that I really need to get my own place.
Posted by Duane at 1:36 PM